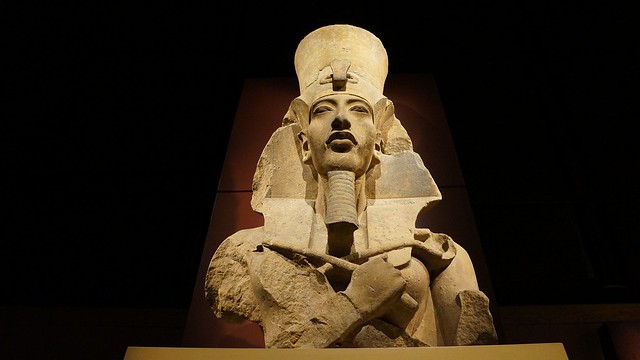 Akhenaten was an ancient Egyptian pharaoh who reigned about 3,500 years ago. He made some major, but rather short-lived changes to various aspects of ancient Egyptian culture, the most notable one being his religious revolution. Akhenaten also made major changes in the ancient Egyptian art style, and presented himself in a very different manner from any of his predecessors. Akhenaten ruled in the eighteenth dynasty, which seemed to be an age of revolution in ancient Egypt. Only a few reigns before his had been the reign of Hatshepsut, the most famous (but not the only) female pharaoh. Akhenaten’s strange appearance and mysterious behavior, as well as his connection with Nefertiti and with the ill-fated “boy king” Tutankhamen, have made him the subject of much passion and controversy in the last century or so. Akhenaten is all things to all people–to some he was a fanatical lunatic, to some he comes across as a strange, eccentric young man whose behavior was strongly influenced by his mother, to others he was a Christ-like visionary and a mentor of Moses, and to still others he was simply someone who happened to be at the wrong place at the wrong time and who really had nothing to do with the dramatic reformations that went on during his reign. Akhenaten is also known for writing a long hymn in praise of the god. Artefacts which proved this Egyptian Pharoh’s existence were discovered only recently, in the 19th Century. Many of the inscriptions which were recovered revealed that Akhenaten was insensitive to his allies. He did little to help the neighboring allies of Egypt recover from situations of acute political crisis. Many of the modern day-historians and researchers are of the opinion that Akhenaten was one of the very few ‘Scientific-thinking’ people of his times.