Mount Everest. The tallest mountain in the world soars almost five and a half miles into the sky and pierces the jet stream with its iconic summit. Mount Everest, known as the highest mountain in the world, Everest stretches along the border of Nepal and Tibet/China in southern Asia. It is  29,035 feet above sea level. It was formed the same way as the rest of the Himalayas. The climate in Mt. Everest is so extreme that your body starts to shut down if you start to reach the top. There are many people who have attempted to climb to the peak of Everest, and some who have made it all the way.

The best time to go is from late April to early June, and late September to early November, as there is little rain and snow, and daytime temperatures are above freezing.

Everest, like the rest of the Himalayas, ascended from the floor of the ancient Tethys Sea. The whole mountain range originated when the Eurasian continental plate clashed with the Indian sub continental plate around 30 to 50 million years ago. The mountain is covered with glaciers that fall from the main peak and its nearby smaller peaks.

To enter Tibet you need a Tibet Entry Permit, and to visit Mount Everest you need an Aliens’ Travel Permit. You are not allowed to apply for the permits by yourself and you can’t travel Tibet without a tour guide. You need to find a travel agency to help you arrange it. 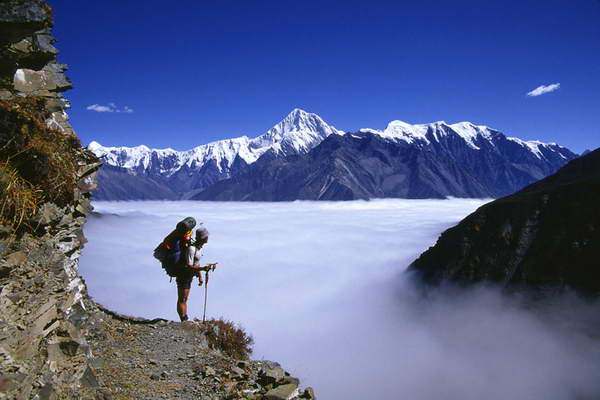 It is pyramid shaped and has three massive faces and three major ridges, which rise to the summit from the north, south, and west and separate the glaciers. The main glaciers are the Kangshung glacier, the Rongbuk glacier, West Rongbuk glacier, the East Rongbuk glacier, and the Khumbu glacier. Naturally, the climate at Mount Everest is fanatically cold. The summit temperature ranges from -33 ºF to -76 ºF in January. Although Mt Everest is the highest mountain on Earth above sea level, its summit is only the 5th farthest from the Earth’s centre. Because the Earth bulges at the equator, mountains such as Mt Chimborazo in Ecuador have summits that are farther away.

The summit temperature never rises above freezing. The harsh western winds blow around the summit and against the peak in winter and spring. From June through September, the mountain lies in the deadly way of the Indian monsoons in which time violent snowstorms are common. From November through February, the summit is struck with hurricane winds that may reach more than 177 miles per hour. At 28,250 feet, there is only 30% of the oxygen there is at sea level, so the body starts shutting down.In 1865, The Royal Geographical Society gave Mt Everest its English name in honor of George Everest, a Welsh surveyor who was the British Surveyor General of India from 1830 to 1843. The mountain has other names in languages such as Nepali and Tibetan