The Grand Bazaar in Istanbul is one of the largest covered markets in the world with 60 streets and 5,000 shops, and attracts between 250,000 and 400,000 visitors daily. It is well known for its jewelry, hand-painted ceramics, carpets, embroideries, spices and antique shops.

Many of the stalls in the bazaar are grouped by type of goods, with special areas for leather, gold jewellery and the like. The bazaar has been an important trading centre since 1461 and its labyrinthine vaults feature two bedestens , the first of which was constructed between 1455 and 1461 by the order of Sultan Mehmed the Conqueror. The bazaar was vastly enlarged in the 16th century, during the reign of Sultan Suleiman the Magnificent, and in 1894 underwent a major restoration following an earthquake.The Grand Bazaar reached its present size after the surrounding streets were provided overhead cover using canvas and the neighboring Hans were integrated into it. 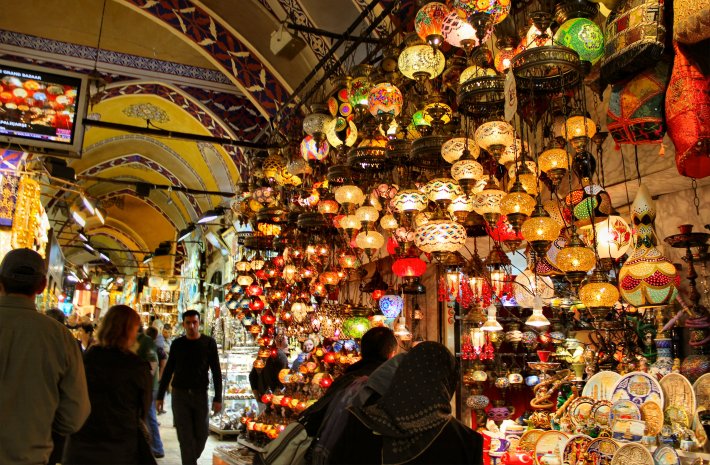 Hans (inns) are two- or three-storied buildings. The shops within the Hans were called hucre (cell) and they faced the square or rectangular inner court.Every street was dedicated to a profession. Today most of these professions have disappeared but their memories live on through the names of the streets. Initially the roofs of the domes were covered with lead sheets. Later clay tiles from Marseille were used and today they are covered with ordinary tiles.Competition was banned in the Grand Bazaar. Up to the 19th century, the shops, called dolap, did not have a name or signboard. The Grand Bazaar underwent restoration only after the 1894 earthquake.

It was after that when Western style signboards and display windows started being used. While there were 29 hans before the restoration process, only 17 were left after the restoration. Up until recently the Grand Bazaar was home to 5 mosques, 1 school, 7 fountains, 10 wells, 1 water dispenser and 1 ablution fountain. Today only 1 mosque and 1 ablution fountain are left. It has 21 gates, 2 bedestens, 17 inns, 56 streets, nearly 4000 shops and employs more than 30.000 people.