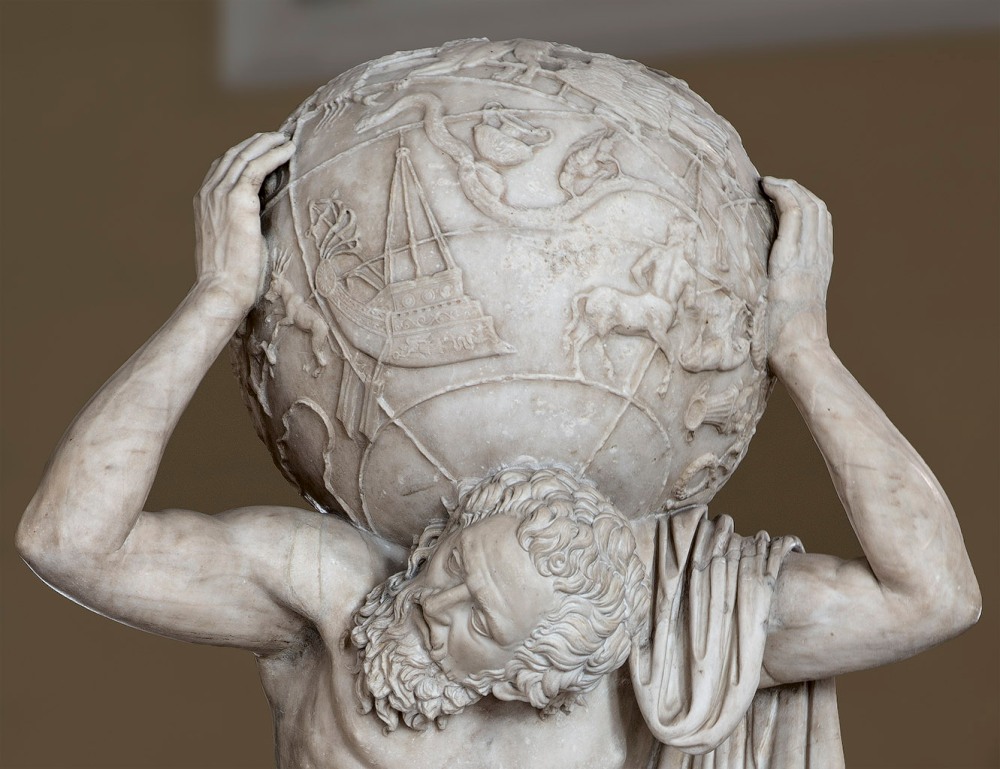 In Greek mythology the Titan Atlas was responsible for bearing the weight of the heavens on his shoulders, a burden given to him as punishment by Zeus. With a name perhaps conveying the meaning ‘very enduring’, Atlas was the son of the Titans Iapetus and Clymene (or Themis) and the brother of Epimetheus, Menoetius and Prometheus. Atlas was the father of the nymph Calypso and another daughter was Maia, who was one of the Pleiades and mother of the messenger god Hermes. Atlas was a legendary Titan. He was in a lot of stories, starting with a story including a hero named Hercules. Atlas led a battle of Titans against Zeus which lasted for ten years. Eventually Atlas was singled out by Zeus and forced to hold up the heavens as a special punishment. The Earth goddess gave Juno, Jupiter’s wife, a tree of golden apples as a wedding present. Atlas’s daughters had the role of protecting it. Hercules was ordered to fetch the golden apples from Atlas’ daughers, so he asked Atlas for help. Atlas had Hercules hold up the heavens while Atlas went to look for his daughters, who had the apples. Finally Atlas returned, but he didn”t want to take over holding up the sky again. He had enjoyed his brief break and told Hercules that he would deliver the apples himself to the king. Hercules tricked Atlas into taking the load back by asking Atlas to hold it while he shifted the load. Hercules then took the apples and Atlas again shouldered the weight of the heavens. Because the place where Atlas stood to perform his task was the westernmost end of the world known to the ancient Greeks, the ocean near him was called the Atlantic meaning the “Sea of Atlas” in his honor