Cape Town is a port city on South Africa’s southwest coast, on a peninsula beneath the imposing Table Mountain. Cape Point is an Executive Partner of Cape Town Tourism. Looming large and welcoming you to Cape Town, whether you are arriving by plane, train, boat or automobile, is the iconic Table Mountain, one of the 7Wonders of Nature. Table Mountain National Park defines the city. The flat-topped mountain is the headline act, but there are many other equally gorgeous natural landscapes within the park’s extensive boundaries. Cultivated areas, such as the historic Company’s Gardens, Kirstenbosch Botanical Gardens and Green Point Park, also make exploring the city a pleasure. Follow the lead of locals by taking full advantage of the abundant outdoor space: learn to surf; go hiking or mountain biking; tandem-paraglide off Lion’s Head; abseil off the top of Table Mountain – just a few of the many activities on offer.

Looking at it from below is one thing, but it is quite another to be atop the mountain, from where one is afforded such wonderful views of Cape Town, Robben Island, the Peninsula and beyond. Groot Constantia is South Africa’s oldest wine producing estate with an uninterrupted record of wine production since its inception in 1685, boasting a proud heritage of 330 years this year. The Groot Constantia trademark is also one of the oldest surviving trademarks in the world today. Cape Town’s City Hall was built in 1905 in Italian Renaissance style, and is one of the last Victorian-style sandstone structures in the Mother City. Despite showing its age, Cape Town’s iconic City Hall continues to be sought out by urban explorers. Martin Melck House is one of the oldest colonial homes in South Africa named after its first owner. Its history is intimately entwined with that of Cape Town itself.

The Montebello Design Centre is one of Cape Town’s best-kept secrets. The centre features more than 20 arts and craft studios and workshops, an historic greenhouse and nursery, a forge, stunning restaurant and organic deli farm shop. It’s a non-profit development project aimed at promoting good local craft and design, and generating job creation. As a new day dawns a light shines from the southernmost tip of Africa. As evening sets that light shines even brighter.  A unique approach and distinctive techniques combine with success in the international art scene and he describes it as a ‘remembrance’ of intimate moments, in the context of a uniquely African conversation. More fondly known as “the people’s cathedral”, St George’s Cathedral in Wale Street represents the Anglican diocese mother church in Cape Town. The Castle of Good Hope – the oldest building in South Africa – was once a fort, but today functions as a showcase of the Cape’s early days. Situated at the base of the Hottentots Holland mountains on the False Bay coast, the pretty village of Gordon’s Bay is a relaxing holiday spot. 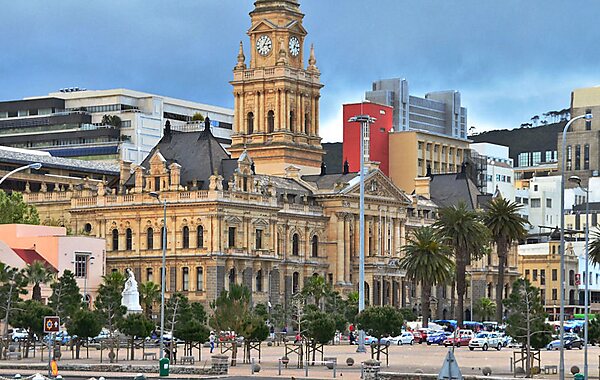 Bikini Beach, Gordon’s Bay Situated at the base of the Hottentots Holland mountains on the False Bay coast, the pretty village of Gordon’s Bay is a relaxing holiday spot. Camps Bay Under the looming Twelve Apostles and Lion’s Head, with views out across the turquoise-coloured sea, Camps Bay sports some of the trendiest places in Cape Town to see and be seen. WESSA Blue Flag A Blue Flag is an international award given to beaches, boats and marina’s that meet EXCELLENCE in the areas of safety, amenities, cleanliness and environmental standards.

The strict criteria of the programme are set by the international coordinators of the Blue Flag campaign in Europe. Chapman’s Peak and Noordhoek Chapman’s Peak Drive winds its way between Noordhoek and Hout Bay and is touted as one of the most spectacular marine drives in the world. Constantia Wine Route Constantia Valley is the oldest wine-growing area in Southern Africa and features superb wine estates, fantastic shopping opportunities and a variety of excellent restaurants.