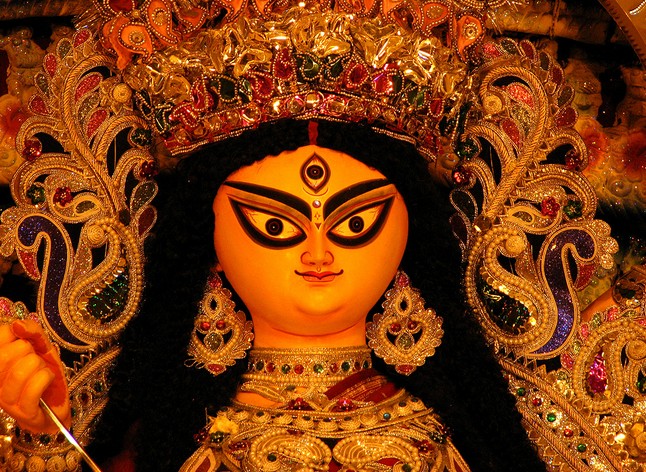 In India, Navaratri is celebrated four times a year. They are Ashada Navaratri, the Sharad Navaratri, the Maha Navaratri and the Vasantha Navaratri. Ratri means “night” and Nava means “nine”. At Navaratri (“nine nights”), the Lord in the form of the Mother Goddess is worshipped in Her various forms as Durga, Lakshmi and Saraswati. Though the Goddess is one, She is represented and worshipped in three different aspects. On the first three nights of the festival, Durga is worshipped. On the following three, Lakshmi and then Saraswati Devi on the last three nights. Navratri is divided into sets of three days, each section is devoted to one of the goddesses, which symbolise an aspect of womanhood. On the first three days, we worship Kali, the goddess of honour, who destroys all of our impurities and sins. During the next three days, we worship Lakshmi, the goddess of wealth. It is believed that she blesses her devotees with luck and prosperity. On the fifth day, all books are gathered and a lamp is lit to call upon Saraswati, who is the goddess we worship for the final three days. Also known as the goddess of knowledge & wisdom, and the wife of Brahma. On the eighth or the ninth day, many people take part in a ‘yagna puja’, at their own home or attend the one at their local temple. It is a sacrifice offered to the fire, and where we bid our good-bye to the goddesses Durga. For us to be successful in our lives, we need blessings from all corners of womanhood.  Durga One of the names she is known by is ‘Devi Mahishasuramardini’. This means ‘the Goddess Killer of the Buffalo Demon’. Devotees see her to be gentle & mild and also, frightful & terrible. There was once a demon, called Mahishasura, and he couldn’t be killed by any of the gods, because he had a protective spell on him that stops any males from killing him.years ago, there were some differences between the Gods and the Demons. A terrible battle had started and it continued for ages. Unfortunately, the Gods got defeated, and they lost the battle. They all went to the superior, Brahma, Vishnu and Shiva, informing them about their defeat. The Gods were furious, they could not have this happening in their land. In their anger, parts from all the Gods came together, and another life was created, all in one single female form. The Devi kept laughing and laughing, and the skies were filled with a sort of cackling noise. The earth trembled, and the mountains moved as this life was created. The Gods were pleased, and cried ‘Victory’ to the one who rides the lion. The great goddess was born, and she battled with Mahishasura. Mahisha tried many techniques, including changing his form every time she made an attempt to kill him. Even still she defeated him, and the gods praised her. She promised that if in need of aid, all they have to do is call, and she just disappeared.