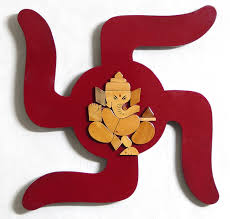 For the Hindus and Buddhists in India and other Asian countries, the swastika was an important symbol for many thousands of years and, to this day, the symbol can still be seen in abundance – on temples, buses, taxis, and on the cover of books. It was also used in Ancient Greece and can be found in the remains of the ancient city of Troy, which existed 4,000 years ago. The ancient Druids and the Celts also used the symbol, reflected in many artefacts that have been discovered.The word ‘swastika’ is a Sanskrit word (‘svasktika’) meaning ‘It is’, ‘Well Being’, ‘Good Existence, and ‘Good Luck’. However, it is also known by different names in different countries – like ‘Wan’ in China, ‘Manji’ in Japan, ‘Fylfot’ in England, ‘Hakenkreuz’ in Germany and ‘Tetraskelion’ or ‘Tetragammadion’ in Greece.