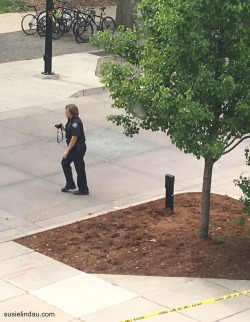 Shia LaBeouf and I hung out last Sunday.

The afternoon stretched to more than three hours when two shootings occurred right outside the Boulder Museum of Contemporary Art. I thought it was some rude person tapping on the wall. Nope. Police crime taped the area and placed everyone in the building on lockdown. Most of us were pretty oblivious.

My interest in Shia’s talk began when local newspapers reported tweets of GPS coordinates for his next art installation, #TAKEMEANYWHERE. I checked it out. Using Google Earth, each photo depicted roads, intersections or land formations. Every day at noon, I checked out his tweet with the latest. Yesterday’s was 41°09’30″N 104°39’32″W. It was very cool. I was hooked.

If you thought Shia LaBeouf had a nervous breakdown, think again.

The team of LaBeouf, Nastja Ronkko, and Luke Turner have been constructing art installations for two years. They spoke at MediaLive –…